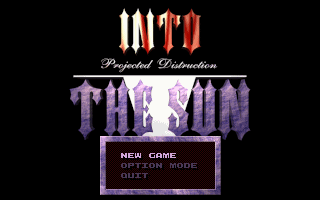 Into the Sun: Projected Distruction ( sic) is a Korean-made horizontally-scrolling shooter similar to IAS. The player controls a fighter craft that flies above planet surfaces and traverses hostile bases in order to avert a threat imposed by an alien force on humanity. The preceding game's secondary weapon that specifically targeted enemy missiles has been replaced by a more conventional powerful all-screen attack. Missiles, smart bombs, and satellite guns are not available as power-ups any more, and must be purchased in a store between stages.