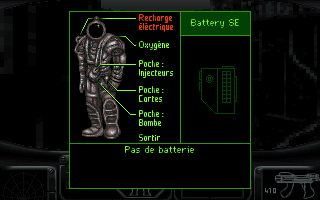 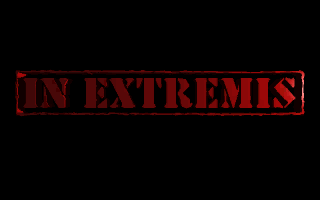 In Extremis is a science-fiction First Person Shooter (FPS) in which you play as a crashed space pilot stranded aboard a derelict vessel. To escape, you must collect key cards and insert them into terminals. Valid cards will give you a code for the current level. That code will grant you access to lockers containing weapons and equipment. A second set of key cards opens up elevators, allowing you to travel to deeper into the ship's 29 levels. Technically, the game is similar to graphical updates of the Wolfenstein 3-D engine (such as used in the Blake Stone series), and features textured walls along with optional floor and ceiling textures. Faked lighting effects (your screen shifts to a different colour as you pass under coloured lights) also appear. Architecture is still limited to 90 degree angles and heavy on mazes. Aside from finding new weapons and blasting aliens, you have a limited inventory of pickups to manage. Your suit's air tanks are constantly depleting, and must be replaced with fresh tanks before they run dry. Your suit contains a motion tracker and nightvision, both which drain the same replaceable batteries. Syringes can be collected and used to restore your health. Finally, alien nests appear on some levels and endlessly spawn new enemies. Bombs can be collected and deployed to destroy these.