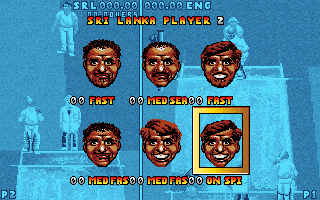 The game uses the name of genuine cricketer and adheres to the one-day cricket 1991 rules interpreted by developers for the guidance. Contested by two teams of eleven players each, cricket is a very technical bat-and-ball game played on a grass oval-shaped field, in the centre of which are a flat strip of ground, called a cricket pitch, and two wooden wickets placed at each end of the pitch. The bowler, a player from the fielding team, bowls a hard, fist-sized cricket ball from the vicinity of one wicket towards the other. The ball usually bounces once before reaching the batsman, a player from the opposing team. In defence of the wicket, the batsman plays the ball with a wooden cricket bat. Meanwhile, the other members of the bowler's team stand in various positions around the field as fielders, players who retrieve the ball in an effort to stop the batsman scoring runs, and if possible to get him or her out. The batsman — if he or she does not get out — may run between the wickets, exchanging ends with a second batsman (the "non-striker"), who has been waiting near the bowler's wicket. Each completed exchange of ends scores one run. Runs are also scored if the batsman hits the ball to the boundary of the playing area. The match is won by the team that scores more runs. Choosing between a bowler, or a batsman, game player defines the role of its team. During the match game player may control all his team players, nearest to the ball to achieve the main goal. Power, direction, and the moment should be used properly to achieve it more successfully. Eight countries (England, New Zealand, Australia, Sri Lanka, South Africa, India, West Indies, and Pakistan) are available to select and game player/players may be appointed either to CPU, which has a three difficulty levels, or to human.