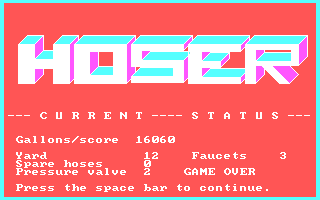 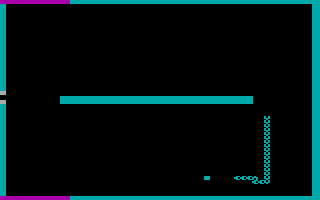 An adaptation of Snake where your multi-segmented character represents a garden hose: move it about in four directions across the playfield, collect targets to proceed, and make sure to avoid your own tail and other barriers. All targets ("faucets") shown on screen must be picked up before the timer runs out. In earlier levels you only get one at a time, but this later increases to two and three; if you take too long, a new set appears and your hose grows longer as punishment. Beat the clock three times to proceed to the next "yard", with an extra life ("spare hose") for your trouble. Later levels also set the "pressure valve" higher, which increases the timer's speed. Two different level sets are included: in the "amateur" levels, movement controls behave as you'd expect, and you turn at right angles; the "professional" levels feature a pseudo-isometric scheme, where the vertical axis becomes diagonal, to make things trickier.