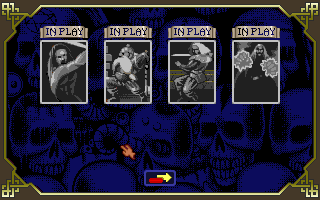 The famous fantasy-themed board game was converted into an isometric-viewed role playing game in which the evil Wizard Morcar must be defeated. You take control of a wizard, a dwarf, a barbarian and an elf, each with different strengths and weaknesses, who each start the 14 missions from opposite sides of the board. Strict turn-based movement rules apply, as actions other than movement can only be carried out before or after the move, the size of which is limited by a dice roll. These moves are carried out using an icon-based system. Characters can fight the many monsters which lurk, or cast spells to vanquish them. There are magic potions to uncover, but also hidden traps, so mapping is advised. Treasure can be collected, and traded at the shop after each level.