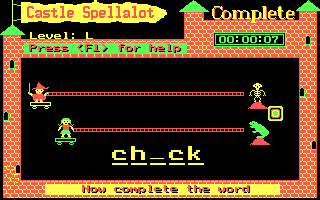 Henrietta's Book Of Spells is one of a series of educational titles from Scetlander. This game focuses on English and was originally created for Archimedes A3000 before being ported to the ZX Spectrum and Commodore 64 and DOS. Henrietta's Book Of Spells was later remade for Windows, that version used five different languages. Previous games saw Henrietta marry the love of her life, Henry. This game starts when they've been married for two weeks. Henry visited Morgana The Morbid in Castle Spellalot and the two had a heated discussion the upshot of which is that Henry is now a fat frog. The object of the game is therefore to help Henrietta undo the spell. The initial menu offers the player two choices a game for 7-10 year olds, a game for 11-14+ year olds and a game editor. After selecting one of the game options and setting the game's difficulty by choosing length of the words to be used (the range is five to nine letters) the player undertakes five mini-games. Each of the mini games use an animation of some sort to score, if successful the player wins a red crystal which earns the player a letter in Henrietta's spellbook. The games, which can be completed in any order, are ; Complete: Here the player is shown a series of words with some letters missing, the task is to type in the full word correctly. Jumbles: Here the player is given an anagram which they must resolve. Flash: The game shows the player a word for a short time, the player must then type it in correctly Hang-up: A hangman game. Crack-It: The player is shown a coded word and has to decipher it, a clue in the form of another word in native and encoded form is provided. When all the mini games have been completed the player will have five letters on Henrietta's spellbook. These are an anagram which is the final puzzle. When the player solves the final anagram there's a short animation which sees Henry restored to his normal shape, the game then shows the high score table and concludes by rewarding the player with a rendition of Henry's concerto. The words use English spelling, 'centre' not 'center' and though the supplied word list is limited the player has the option to add words of their own. Each mini game is timed and there's a 'help' option which shows the correct answer in exchange for a time penalty