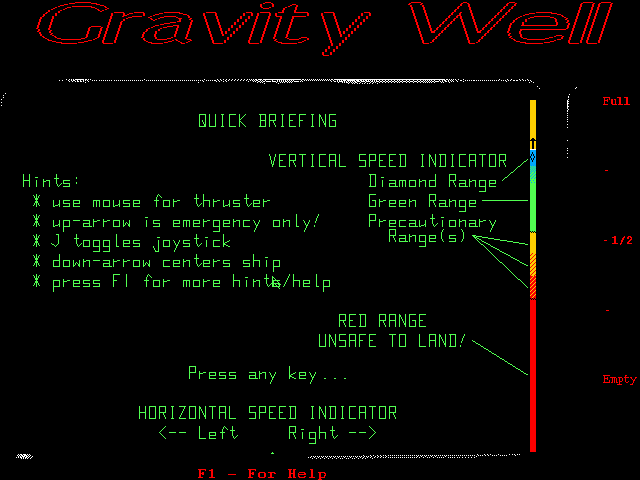 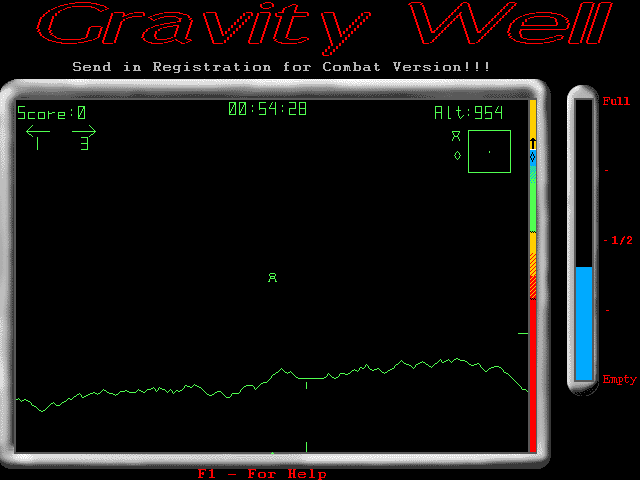 Gravity Well is a single player, shareware game based on Lunar Lander The objective in this game is to land a craft on each of the planet's bases to score points. A good, soft, landing under manual control earns more points than a landing achieved using autopilot. When all landings have been made the player advances to the next planet and so on. Very good landings ear the player diamonds, these can be converted into fuel allowing the player to progress further in the game. The game documentation shows that after the initial release a number of additional features were added, not necessarily all in the same release/version, these include : Lateral (horizontal) motion is used to decide how hard you landed making it possible to land with the vertical speed in the green but with so much lateral velocity the landing gear is ripped off the craft. Landing gear can be damaged by a rough landing. Landing gear can be repaired by landing within the green range. Severely damaged gear may take more than one landing to fully repair it. Timed Trials! A timer is kept as you progress through the planet and is compared against both a par time and the record time for each planet, one each for combat and regular game play mode. The registered game also has a 'Combat Mode' in which each base has a radar dish, gas tank, and a gun emplacement. The player can drop bombs on the base to destroy it but if the gas tank is destroyed they won't get any fuel when they land, and if the gun emplacement is destroyed the player won't get any more bombs.