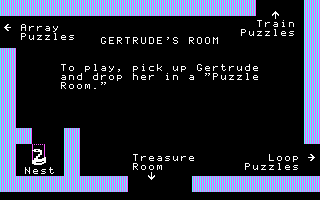 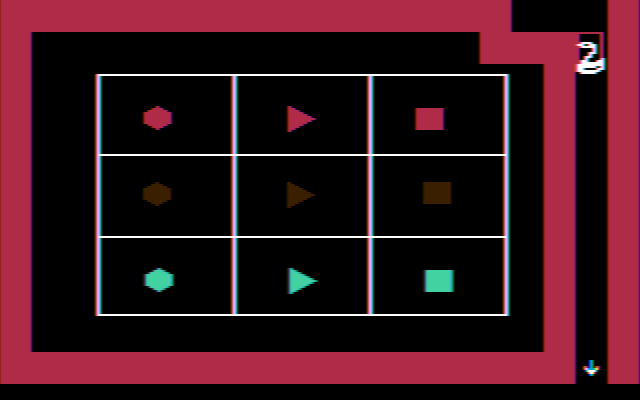 Gertrude's Secrets is, in brief, what you get when you take Warren Robinett's Adventure for the VCS (right down to the quacking dragon-duck!) and turn it into an educational object-sorting game for a younger audience than the earlier Robot Odyssey and Rocky's Boots. Gertrude is a benevolent goose who maintains what might be considered a dungeon: a complex of chambers containing puzzles which yield secrets -- treasures -- upon completion. But instead of monsters, the rooms contain something much scarier to a child: education in the fields of logic, pattern-matching (of colours, shapes and textures) and sorting, categorized internally as Array Puzzles, Loop Puzzles and Train Puzzles. The player interacts with the game world by moving a cursor around the screen with keyboard or joystick, picking up and dropping objects in appropriate places to make things happen -- triggering puzzles or attempting to solve them. The puzzles gradually ramp up in difficulty, and a wide selection of whimsical trophies are awarded. To prolong gameplay enjoyment and the exploration of the play environment, Robinett's trademark easter eggs are in the eaves, as well as UI manipulation well before its time, allowing players to "skin" the game with different tilesets or manually edit individual tiles.