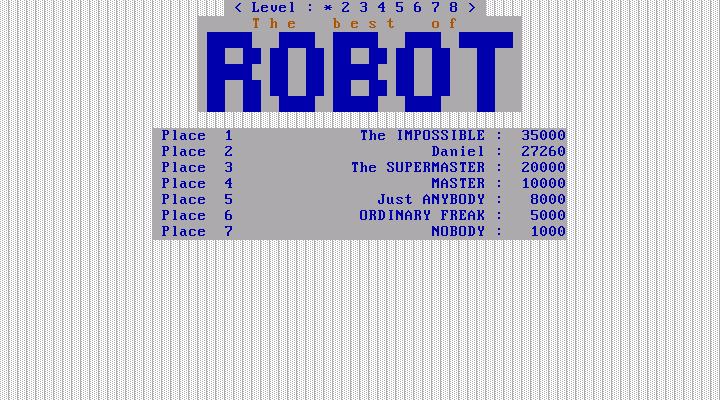 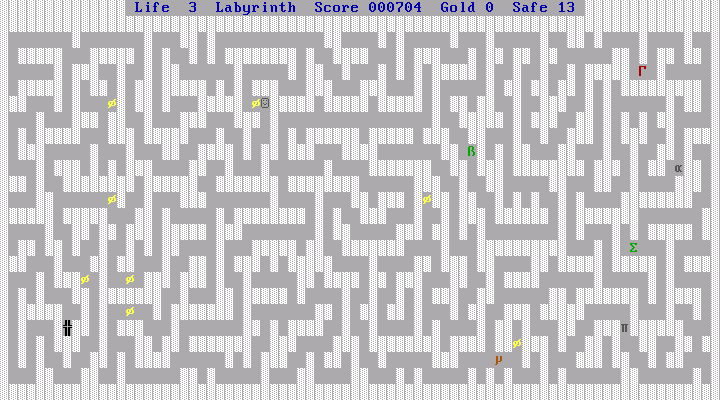 Game of Robot is a text-mode action game in which the goal is to guide a character through a series of rooms, collect some gold, and bring it back to the starting location. The seven rooms along the way are partly designed with a fixed layout, partly generated randomly. Each room is initially populated by a number of robots (displayed as characters from the Greek alphabet) which try to reach the player in a direct line. If the player is touched by any of them, they lose a life. Robots can be eliminated either by leading them into electric fences (red hash characters), or moving isolator blocks in a way that traps them. The more pinned-down they are, the more likely they are to self-destruct. Only when all robots in a room are eliminated, the passage to the next room is opened. The randomly generated rooms have a chance of containing a teleport to a labyrinth room. Players have to observe the movement patterns of the robots in the labyrinth, in order to not get pinned into a corner by them as they move along the mostly linear hallways to the exit teleport. Leaving a labyrinth stage takes the player to the next stage, same as if they had normally completed the room from which they teleported into the labyrinth. Both the labyrinth stages and the final room contain gold bars, which the player is supposed to collect and bring back to room number 1. Dying leads to a loss of gold and one life. Pickups strewn around the stages include extra lives and clones, which help distract the robots. Once the gold has been returned to room number one, players can repeat the process to increase their score further, until they run out of lives. The original version of the game was developed for a custom-build home computer with an MOS Technology 6502 8-bit microprocessor. This DOS port was written in 1986, and later served as the groundwork for the tile-graphics-based Game of Robot shareware game and its successors.