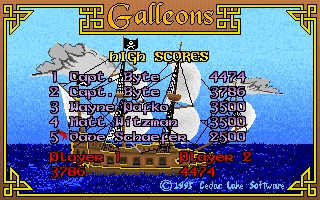 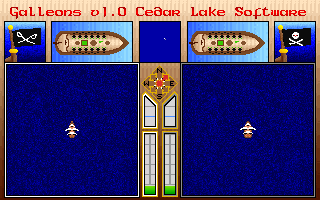 Galleons is a simulation of a battle between two Galleon ships for one or two players, one hoisting a 'Jolly Roger' flag, the other a 'Crossed Sabers' flag. Each ship can be controlled by a human or the computer. The controls are configured for a split keyboard and/or 1-2 joysticks. The objective of the game is to sink your opponent's ship by gunfire or ramming, whilst staying afloat yourself. The ships' equipment (guns, armour, sails, rudder) and crew quality can be configured at the start of each game, and affects the point score given at the end of battle. The game uses a split-screen with a top-down perspective, each half being centered on a player's ship, with the opponent circling. In the top center of the screen is a zoomed out map view with dots representing the two ships. The aiming (range) of the guns is shown in two vertical stripes in the center of the screen, both port & starboard sides for each player. To fire, hold the fire button until the desired range is reached, release it and the broadside goes off (with sound effects and orders called). If the target is hit, a schematic on top of the screen shows the damage by changing colours on affected areas. Above the gun range display, the amount of sail and speed is shown in a vertical bar for each ship. The wind direction is indicated on the center compass rose on the screen, and affects the handling & positioning of the ship. More sail and a larger rudder makes easier handling as well. As the battle goes on, and the ships get damaged, they are harder to navigate, and the final animations show broken masts and a sinking ship for the losing side. After one (or both) of the ships have sunk, a highscore screen is shown.