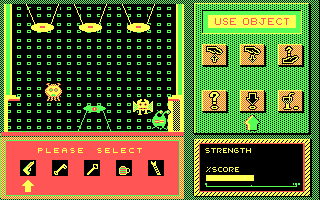 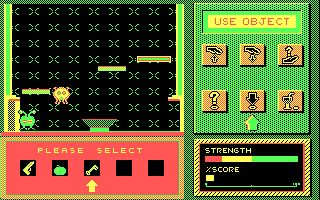 The extraterrestrial hero of 1988's Galactix returns for yet another adventure, this time at the behest of the King of Galaxia. His Alien Highness woke up one day and could not find his three magical orbs; the treasured artifacts have been stolen by bandits, and the agitated monarch immediately sends you on a mission to retrieve them. As before, your path will take you through a series of rooms populated by hostiles, which you'll have to dispatch with your phaser gun to get at the various objects that your quest demands. These are manipulated using a menu-based inventory system, after the style common in adventure games, which complements the basic platform/arcade action as it did in the first Galactix. This time around the challenge is somewhat tougher: it is not enough to simply return the three orbs - your strict sovereign has also decreed that you must eliminate the thieving bandits from the land (along with the treacherous guards), and won't allow you back in the throne room until you've offed them all. This is somewhat complicated by the fact that they come back from the dead when you re-enter a previous room. Also, instead of the infinitely-recharging pistol from the previous game, your phaser has limited ammunition which must be replenished by finding additional bullets.