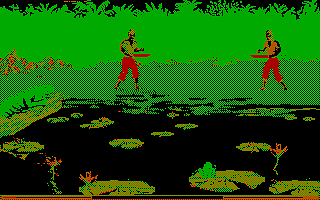 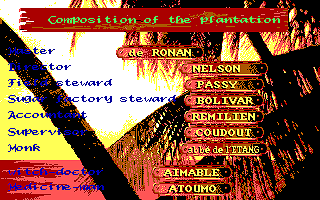 Freedom: Rebels In The Darkness is a game that combines elements of strategy, stealth and fighting games. The main character is a rebellious black slave working on a sugar plantation that tries to incite a revolt among the slave population to gain freedom and to give comeuppance to each of their old masters. At the start of the game there is four characters to choose, each with different statistics and abilities like "constitution" and "lock-picking". The main game screen is a map of the plantation, where you guide a small icon of the character while trying to avoid the guard dogs. If the dogs find you, they either bark and alert the owners or attack you. When they do, the screen switches to a first-person screen where you have to avoid being bitten and killed by the animal. On the top of the screen there are four buttons, each with a unique function: Path-finding lets you click on the map with a cursor and see a description of each hut and house. Movement allows you to move your character. Left-clicking shows a first-person view of your surroundings. This screen can vary depending of the place where you are in the map. Most of the time is the recruitment screen, where you click on your brother slaves to amass a army. Their response is a random "yes" or "no". If you click while on a sugar field, you get the option of climbing the huts, picking the storage hut lock, or setting fire to the premises. If you click while on the housings of the owner or one of his henchmen, you get the option of either confronting the person, or running away. If you decide to confront him, the screen switches to a side-view similar to fighting games like Street Fighter, with two energy bars at the bottom, where you have to fight one of the owner's men. If you win, you have the choice of killing the person or holding him captive. Review is the game statistics screen, where you can see your progress in the game. Advice only starts working once you get the support of either the shaman or the medicine man. They can heal any wound sustained by dog attacks and fights. The game accepts mouse, keyboard and joystick controls, and plays drum music and other sounds.