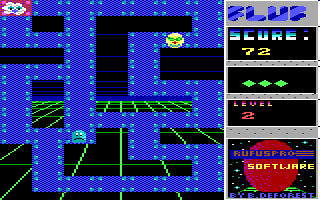 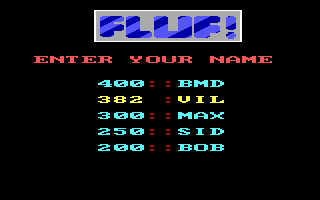 Fluf! is a maze-based action game which vaguely follows the same general idea as Pac-Man, with a few important differences. Most obviously, the maze layouts and the marauding monsters are different from level to level, and instead of gobbling up all the dots the goal is to flip the blue squares over to red (by simply walking over them). These factors notwithstanding, the baddies still roam the passages and would happily make a meal of our white fluffy protagonist should they meet. Echoing its inspiration, the game throws the occasional fruit bonus at the player, but instead of helpful power-pills or side tunnels there are deadly traps: the "black hole" tile will end the game immediately if encountered, no matter how many lives are left. One breed of nasties will occasionally turn red tiles back into blue, requiring more mileage to flip them again. The five highest scores are recorded, but only for the current session. The game is written in Tandy 1000 BASIC and will not play properly on other machines.