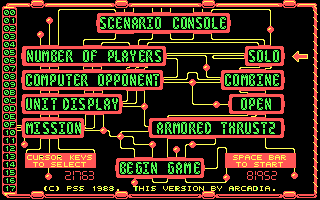 2160. Beam technology, energy shields, and ground-skimming propulsion systems have revolutionized ground combat into high-speed, wide-ranging battles. World powers like the Pacific Combine and the European League spar and vie for territory with Grav tanks, striders, and Leviathans. Take the role of a commander overseeing one of these skirmishes and match your tactical wits with the computer or another player. Firezone translates pen-and-paper, tactical wargaming to the computer screen. Your primary view is a hex battle map with up to seven different types of terrain, showing stacks of infantry, artillery, armor, and command bases. There is a structured turn sequence, with players alternating movement, fire, and retaliation. The game stretches beyond a table-top wargame by allowing hidden units and providing a map-editor with which to create your own scenarios (nine are included).