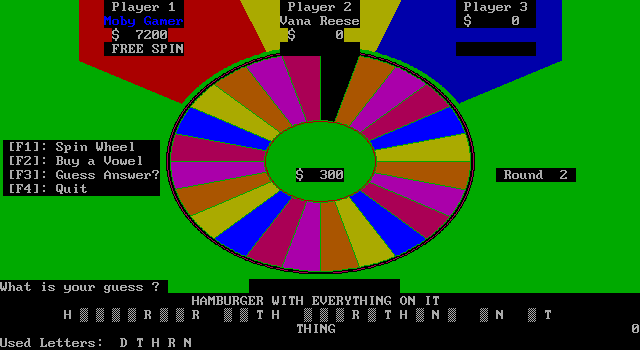 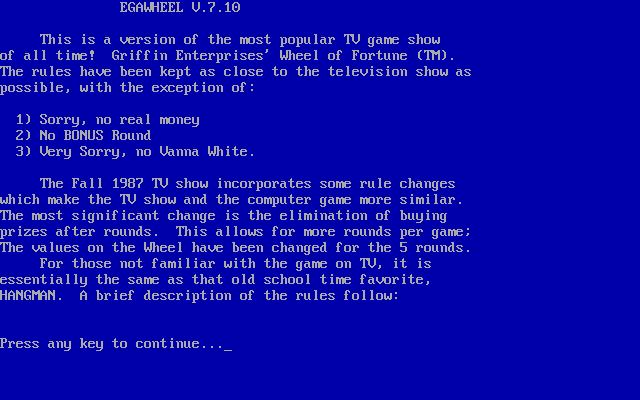 EGAWHEEL is a wheel of fortune, shareware game for one to three players. It was developed by Russell Mueller who later used this game as a basis for VGAWHEEL which uses a different graphical standard. The gameplay follows the format of the famous television game as it was in the autumn/fall of 1987 when the buying of prizes after each round was dropped from the show. The only major difference between this game and the show at that time is that the game has no bonus round. The game is played over five rounds. In each round the player(s) is/are presented with words which can be a phrase, a name or a thing. All the letters are blanked out and the players take turns in guessing which letters could be part of the hidden word(s). Within their turn a player may spin the eponymous 'Wheel of Fortune' to guess a consonant, buy a vowel or guess the word. If the player guesses a consonant correctly then their score is increased by the number of times that letter occurs multiplied by the amount shown on the wheel. Rounds one and two are easier because they have FREE SPIN segments which the player can use to retain control of the wheel should they guess a consonant that does not appear, later rounds are harder because though the values on the wheel are higher the FREE SPIN segments are replaced with BANKRUPT segments. This shareware game has eight hundred and fifty puzzles and comes an editor that allows the player to add their own puzzles, alternatively a puzzle disc with a further five hundred puzzles could be bought.