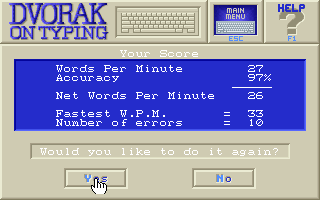 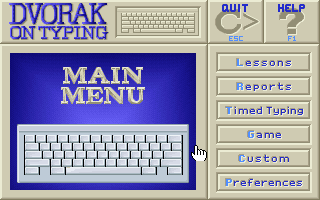 Dvorak on Typing is a typing tutor developed in conjunction with computer columnist John C. Dvorak. The program consists of lessons as well as a game. The lessons simply involve typing the keys shown on screen and there is a visual keyboard that highlights the location of the keys. On the screen are also two meters which give feedback on how well the player is doing, one for accuracy and one for WPM (words per minute). The lessons are voiced by either Dvorak himself, Tracy (a child's voice) or Loren (and adult women's voice). It is possible to use either a Qwerty or a Dvorak keyboard. Lessons can also be run in a timed mode. In the game the player controls a medieval knight that fights evil adversaries. As the player types the knight on the screen will attack the enemy. Faster typing leads to the knight being more successful in the fight. After completing a number of lines of text the player is allowed to rest for a minute and can then watch the knight in action.