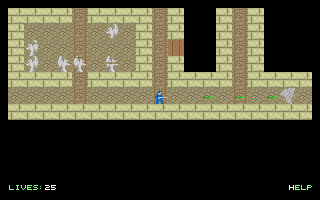 Dunjax chronicles the exploits of a space-traveling adventurer who has just crashed his ship on a newly-discovered planetoid. The uncharted sphere appears to have a breathable atmosphere and its own alien inhabitants; unfortunately, when the protagonist awakens from his daze, he finds that a crucial part of the ship's propulsion system has gone missing in action - stolen, or (worse yet) eaten, by the curious (or simply hungry?) natives. Their tracks lead to a series of caves, which must be explored to find the missing part... hopefully in an undigested state. Our intrepid explorer is equipped with an automatic handgun and with levitation boots, which allow for extended jumping acrobatics. The caves can be explored in a quasi-open world fashion, and each one has an exit hidden somewhere within the maze of the dangerous chambers, locked doors, slanted chutes, rocky spikes and lava pools; many walls and floor tiles hide secret passages, which in some cases function as traps. The hostile cave-dwellers do not enjoy human intrusions, and will attempt to take out the player by draining away his lives (which function as hit-points). The action is viewed from a side-scrolling 2D perspective, which considers the protagonist's vision - areas not in direct line-of-sight will remain in the dark until explored. A password is provided at the end of each level, so that the game can always be continued from the next one.