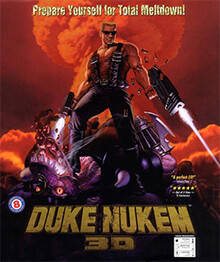 Duke Nukem 3D is a first-person shooter video game developed and published by 3D Realms.
Released on April 24, 1996, Duke Nukem 3D is the third game in the Duke Nukem series and a sequel to Duke Nukem II. The game was a commercial success and has seen numerous console ports, expansion packs, and special edition re-releases since its debut.

As a groundbreaking entry in the first-person shooter genre, Duke Nukem 3D was generally well-received by critics. The game was also immediately controversial and drew criticism in the mainstream media for its violence and pornographic content.

A sequel, Duke Nukem Forever, was released in 2011