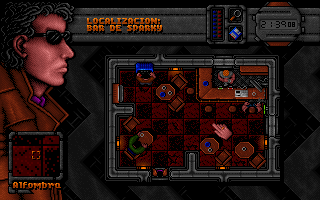 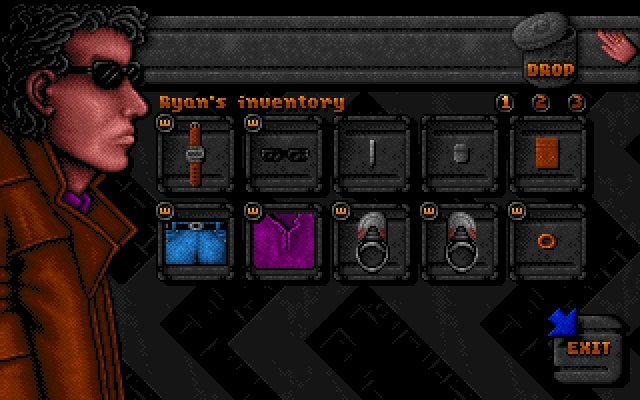 Ryan, a bartender from a dystopian future can't sleep peacefully for months. His nights are sequences of nightmares and strange dreams, days with frequent black-outs with strange visions, until one night a figure in monk attire appears to him, and tells him the story of the seven evil ones, uniting to destroy to Dreamweb, the only barrier between the world and darkness. The monk makes a proposition: Ryan becomes the "deliverer": the one who would keep the Dreamweb safe by killing those who try to destroy it. Descending into paranoia and just wanting dreams to stop, Ryan accepts the mission, then wakes up in a puddle of cold sweat, next to his beloved girlfriend in her house, and late for work. Again. DreamWeb is a top-down adventure game set in a gritty futuristic dystopian city. Each location takes only a small portion of the screen without panning (except an optional small zoom window in the corner that follows the cursor), with the player interacting with objects and people by simply clicking them. Ryan has a limited inventory space, and as a lot of objects can be picked up (many without any use), the player must rationalize what might be useful and what just serves as filler. Dialogue is straightforward, with no options, but still required to advance in the game (to find new locations, for instance). In situations where many adventure games usually feature an indirect approach to solve a problem, Ryan often faces himself with situations where it's "killed or be killed", which result in deaths (sometimes of innocents). The game also contains a few scenes with graphically explicit sexual situations. The original release of the game included Diary Of a (Mad?) Man, a 40-page diary telling the descent of Ryan into madness, or his destiny, written by Stephen Marley, providing a complete background to the events leading to the start of the game.