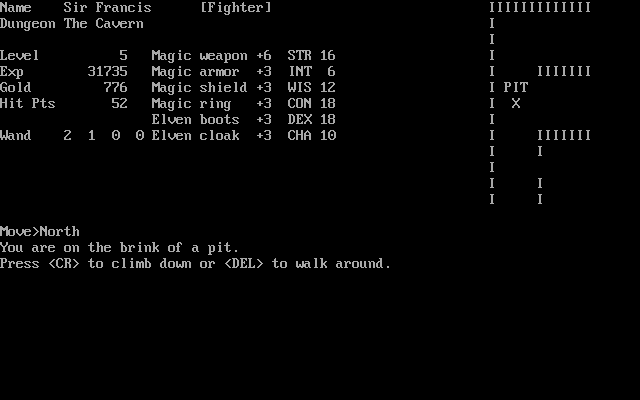 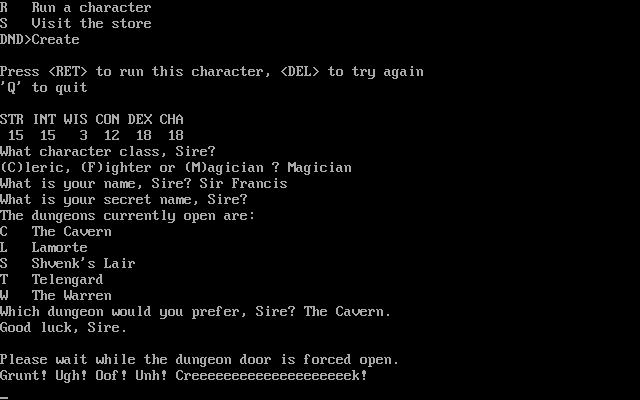 DND is the seminal mainframe classic, which started computer role-playing games. The name of the game clearly comes from the Dungeons and Dragons (D&D) pen and paper role playing systems, and it uses D&D rules. Further inspired by Pedit5, the game itself is a classic dungeon crawl. It could be counted as a "rogue-like" but doesn't have random dungeons. DND lets you generate your character by randomly rolling attributes (Strength, Intelligence, Wisdom, Constitution, Dexterity and Charisma) and then select one of three classes (Cleric, Fighter or Magician, the first and last are able to cast spells). You then may visit the store where you can buy armour, weapons etc. -- of course, at the very beginning of the game you have no money to spend! Finally, you have a choice of five dungeons to enter, each one with several levels. The dungeons are depicted by a top-down text-graphics view. You only see the surrounding 3x3 squared of the current level. During exploring, you may encounter monsters which you battle in a very simplistic turn-based fight (you only have the options of Attacking and Evading). If you defeat the monster, you gain experience (sometimes resulting in upgrading a level), and some monsters also leave some treasure. Other treasures are randomly strewn in the dungeon, but beware! Some of them are protected by traps. Other sites you can get along are altars (where you can pray or spend money to get divine protection), books (which randomly change your attributes), fountains with random effects, wands which let you cast spells even as a fighter or Dragon's Lairs containing lot of loot, protected by a mighty dragons. There are also teleporters which may randomly zap you to some other part of the dungeon. The game offers no possibility to save your character -- when you die, it is as if your character never existed! So make sure to leave the dungeon often to buy the best possible equipment.