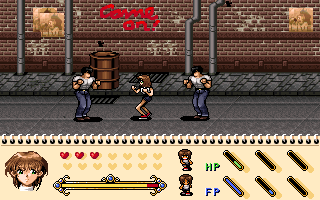 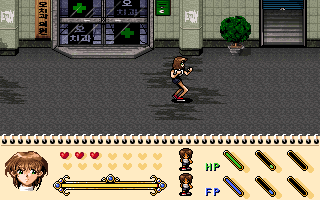 The dentist Dr. O Sang Hyun lives in the suburbs with his wife and their daughter Suhee. Everything goes well until one day he disappears without a trace. Suhee must now travel to the shadier districts of the city and use her brawling as well as negotiating skills to find out what happened to her father. Darkside Story is primarily a beat-em-up, though it also contains extensive sequences that involve Suhee wandering around the city, entering houses, and talking to their inhabitants in order to receive the next bit of information and advance the story. In the beginning the player controls only Suhee, but later in the game other characters become available as well. The fighting is done in a standard beat-em-up fashion: the protagonist has to eliminate all the enemies on screen before being able to advance to the next area. Characters have different attributes and can use punches, kicks, combinations thereof, and special attacks that deplete their HP. Each HP bar equals one heart; Suhee starts with three hearts, but advancing the plot gradually awards her and the other characters with more. HP-restoring items can be picked up by destroying barrels and other objects in the stages.