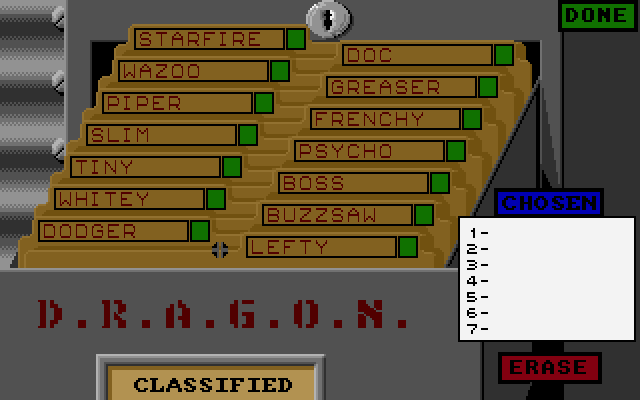 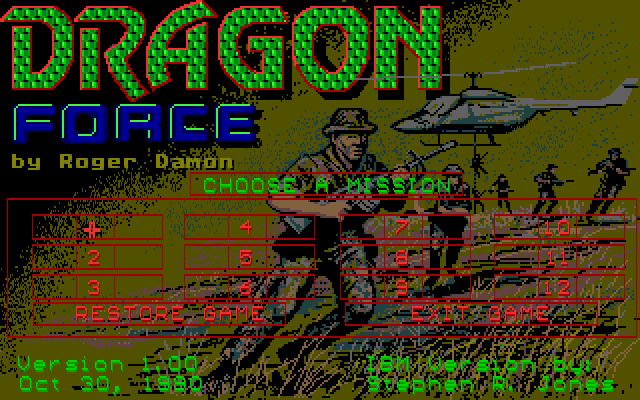 The D.R.A.G.O.N. Force is a mercenary team which only takes the most dangerous jobs. During the course of this game, they will take on twelve missions against drug barons and terrorists. The goals vary from target elimination to rescuing hostages. D.R.A.G.O.N. Force is a turn-based tactics game. During each round, the player assigns orders to the men, e.g. moving, firing or special actions, which are then simultaneously (together with the AI's choices) performed. There is a strategical map (shows the whole mission area) and the closer zoomed in tactical map. As expected, the three fire commands are especially important: the usual direct fire at an enemy, targeting a specific spot or an opportunity fire which gets triggered by passing by enemies. The environment, e.g. hedges buildings, may be used as cover and affects the line of sight. Before each mission, the player has to choose seven soldiers from a pool of 14. Each soldier has different training and therefore a different rating in the abilities medicine, machine guns, anti-tank weapons, scouting, sharpshooting, demolition and close combat. The next step is giving them equipment from a relatively expansive arsenal. The key to success is to have a mix of soldiers with the right equipment (obviously a soldier with low sharpshooting skill should not use a sniper rifle) which are prepared for all possible situations.