Conquests of Camelot: The Search for the Grail | Play | Download | Fork 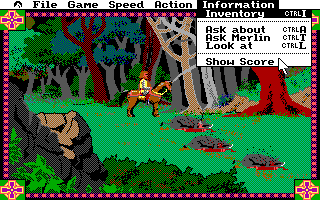 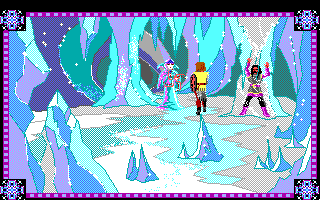 It is the ninth century, and Camelot, the legendary castle ruled by King Arthur, has fallen under a curse. Famine and drought plague the kingdom because of the love triangle between the king, his wife Gwenhyver, and the knight Launcelot. It appears that only the mysterious Holy Grail can restore Camelot, and three knights - Launcelot, Gawaine, and Galahad - embark on a journey to find it, and soon disappear without trace. King Arthur leaves his castle in search of the missing knights, hoping to locate the Grail as well. His quest takes him to real and mythical locations in England, and later to Jerusalem and other areas of the Holy Land. Conquests of Camelot is an adventure game that requires the player to input text commands, mostly by combining verbs and objects (such as "look man", "take purse", etc.). A few commands (such as "ask about") have keyboard shortcuts. Unlike most other adventures, the game does not focus extensively on inventory-based puzzles. Rather, it presents a diverse array of tasks depending on concrete situations. These involve exploration, solving riddles, gathering information, participating in arcade sequences such as jousting, and others. Rudimentary money management is present as well. Many problems have different solutions, and it is possible to reach the final part of the game even without having completed some of the essential quests (e.g. failing to save the knights). However, Arthur is being judged by the game in three different categories: skill (referring to the action sequences), wisdom (evaluating the amount of cultural information gathered), and soul (determining the moral value of Arthur's action). Failure to achieve a high score in the last category leads to a bad ending. The game is set in a concrete historical period, but adds an alternate reality to it, assuming that pagan deities really existed, but were overshadowed by Christian worship. However, there are only a few references to real religious practices of the time or any historical characters.