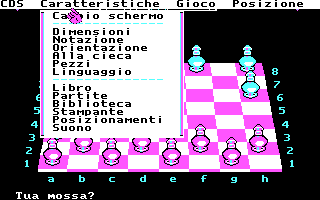 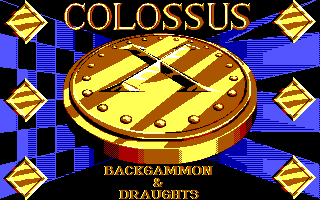 Colossus X Draughts is a single-player, mouse/keyboard controlled DOS implementation of the popular board game. This game is from the developer of Colossus Draughts which won draughts championships in the early 1990's. The game plays in CGA and EGA modes and has the following features: Games can be saved, loaded and replayed. Players can undo and redo moves - referred to in-game as 'Backward-step' and 'Forward-step'. There is a Blindfold option where the player's pieces, the AI opponent's pieces, or both are hidden any of which makes for a really odd game. The player can play against the computer or they can play both sides. There are six types of game; tournament; equal time etc, game clocks, and three types of draughts piece. One of the strengths of the early Colossus Draughts game was its game book, a database of opening moves. This game also has a game book with a database of moves and the game contains a 'Book Keeper' function which allows the player to alter the database - though the manual does stress very strongly that this is for expert users only The pieces are moved by either clicking on first the piece and then the destination, alternatively the player can click on a piece and drag-and-drop it or they can specify a move by typing, for example, g3h4 which specifies the start and end cell. The game communicates with the player via a message area at the bottom of the screen and has an in-game option to change the language of these messages, the languages changed by entering English, Francais, Deutsch, Espanol or Italiano at the appropriate prompt.