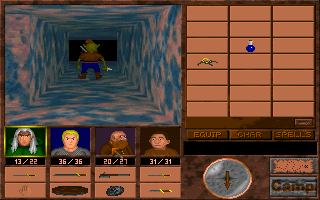 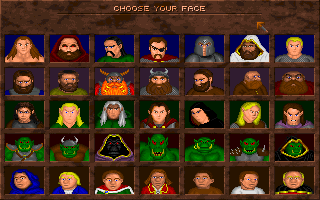 City Beneath the Surface is a fantasy role-playing game played from a first-person perspective similar to Dungeon Master, with grid-based movement and real-time combat. The story is set four years after the end of a brutal war between a human kingdom and orc invaders, which ended with the victory of the alliance between humans, elves and dwarves that was joined by some of the orcs as well. Yet four years later, a mysterious portal opens near the kingdom's capital, and first, all the powerful warriors and mages in the land are slain in their sleep by an unknown force, then horrible creatures start pouring out of the portal. The king decides to send a small reconnaissance group into the portal with the order to gather as much information about the enemy and their leadership as possible. This group is the party of heroes controlled by the player. The game itself consists of 30 dungeon levels filled with various monsters, traps and occasional puzzles. The player's party is limited to four characters, with five races and four classes available. Additionally the game ships with six pre-generated parties (stored in save game slots) for the player to try. Interaction with the world is accomplished mostly with the mouse, with the exception of numeric keypad used for movement. Characters level up upon gaining enough experience points in battles.