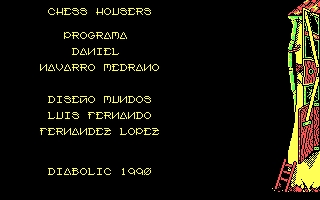 Chess Housers is a puzzle game where the player is to navigate through rooms blocked by chess pieces on a checkered floor, with some similarities to Soko-Ban, only here there is opposition. The objective is to open a path for the players avatar, a glove, to get to an exit point on each level, while avoiding being blocked or squashed by the chess pieces moves. You accomplish this by pushing chess pieces to free squares and removing blocking objects in your and/or their way. When pushed, the pieces move until they hit an obstacle. The player can select to keep or destroy transparent boxes, but not boulders - for these the Knight is needed. Movement of the chess pieces can look somewhat odd; the knight is the piece to aim at a breakable boulder, and it can only move in a straight line to crush it. A pawn will also move only move in straight lines, and will go as far as possible in the direction it's facing, when an obstacle is removed. Rooks jump on your glove if you step in their path. You move the avatar adjacent to a chess piece and use the direction controls to push it, if possible. If the chess piece movement is blocked by a transparent box, then you can push the box instead to make it disappear, and the chess-piece/s will continue moving through the open path, possibly blocking your way or even moving over your hand, in which case it's game over. The original game supports only CGA graphics, and speaker sound effects. Graphics mode/palette is selected in-game with the F1 key. There are several difficulty levels, and the game is played with keyboard or joystick. Keys can be remapped - the directional keys are spread out: Q/A/O/P. There are no save-games, or level passwords in this early version, but those things were added in the later enhanced '93 VGA version.