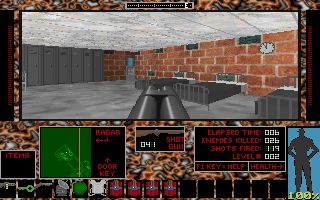 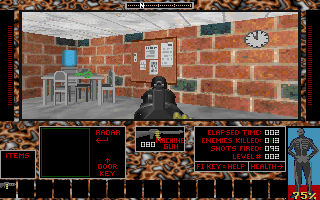 Chemical Warfare is a first-person shooter game created with Pie in the Sky Software 's 3D Game Creation System. The plot involves an unnamed Middle Eastern dictatorship that is secretly manufacturing chemical weapons. The player's objective is to infiltrate the military compound where production takes place, gain access to the underground facility and find the data disk with crucial information on the country's chemical weapons programme. After retrieving the disk, the player must make their way back to the surface while fighting enemy reinforcements. The game ends when the player makes it to the rescue helicopter outside the compound. Chemical Warfare spans across seven levels, each representing a portion of the military compound. As with other games running on the same engine, the player may freely move back and forth between the levels. In certain places the game generates scripted enemy reinforcements when the player revisits areas that have been completed earlier. There is no multiplayer mode.