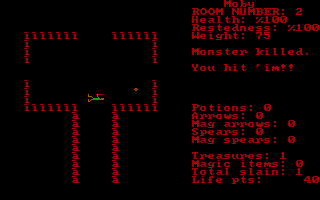 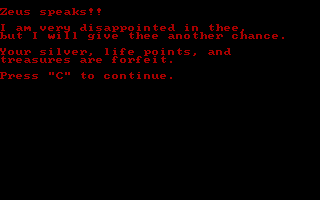 Cavequest is an action-oriented fantasy role-playing game. Zeus has chosen you to leave the Land of the Gods and become mortal on Earth. Before beginning your quest, you are given life points to configure your intelligence, charisma, strength, dexterity, stamina, and wizard skills. Unlike some traditional role-playing games of the time, you have complete control over your attributes. Once you have configured your character, you travel from the Land of the Gods to Earth. After outfitting your equipment at the Armory and magical items at the Witches Lair, you choose one of the five levels of the cave. Life points are gained by killing monsters and collecting treasures in caves. They can be used to enhance your character's attributes or be converted to silver for additional purchases. While in the caves, you will encounter skeletons, giant bats, giant bugs, giant leeches, giant rats, great slimes, lizardmen, antmen, giant squids, and zombies. Be careful to not do too much at one time, or else you may drain your stamina and become too tired to hit the monsters!