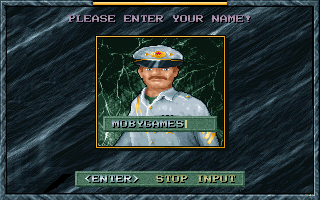 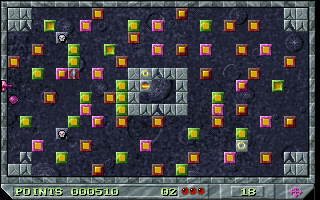 In this real-time puzzle game, the goal is to guide a ricocheting ball throughout the playing field and into the exit hole. The player controls a cannon, which can be moved along the perimeter walls, and shoots it to manipulate the ball and other objects on the screen. When the ball bumps into an obstacle it bounces back in the direction it came from, and absorbing a cannon hit will cause it to match the shot's direction. To complicate this simple premise, each level is littered with objects which have to be moved, rearranged, utilized or avoided to create a safe path to the exit. Certain walls will simply block the ball; others will block the player's shots as well. Breakable blocks will give way after a few collisions, and colored squares can be moved and combined with others of the same color. Other tiles will hold the ball in place, cause it to change direction, teleport it away to a different location, or destroy it altogether. Some levels are timed (beat the clock or lose the ball), others are not. Every other level a password is provided, which can be entered later to continue from the same point.