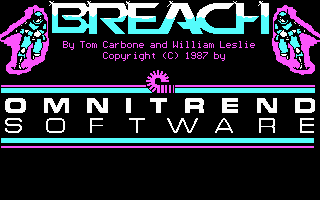 Breach is a turn-based tactical squad combat game. It introduces team-oriented missions, RPG-style squad leader development and a scenario builder. In the ten missions supplied with the retail version (and potentially infinitely more created with the included scenario builder), a squad of usually five space marines under the command of a squad leader embarks on sci-fi missions that involve hostage rescue, data retrieval or simply elimination of opponents. Squad members advance and act in turn on basis of a movement point system. The multi-level maps consist of outside terrain and structures with several stories, connected by lifts, filled with enemies and objects. Squad members can find and use weapons such as grenades, rockets or detonation packs and tools such as Medikits, scanners or shields. In an unique twist, the squad leader advances from mission to mission (while the rest of the team is always new), improving his basic stats with each successfully completed assignment, based on his performance. Only experienced leaders may attempt STAR-rated scenarios. If the squad leader gets killed, he is lost forever: the game deletes the corresponding leader file.