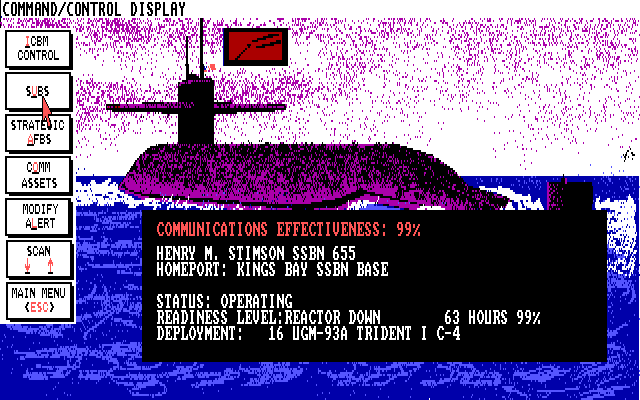 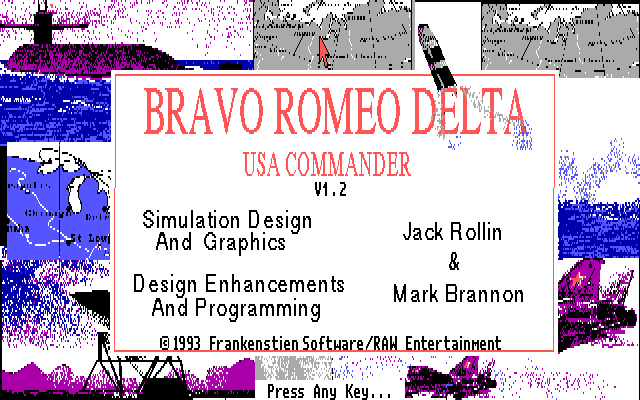 Bravo Romeo Delta is a single player game that allows you to control either the United States' or the USSR's nuclear arsenal during an escalating exchange. Its interface is very basic, with only four screens for reports and input. The game plays in real time and can be set faster. There are dozens of different weapon systems at the player's command, including: air dropped gravity bombs, sub-launched ballistic missiles, ICBM silos, and mobile launchers. Data for each weapon and vehicle is accessible. Locations are displayed as geographic coordinates. Success at destroying a chosen target relies on several factors such as weather or hardness penetration of an attacking missile. The game begins as a Soviet submarine has launched a salvo of three missiles at the United States. The player takes control of one nation and must slowly "out-nullify" the computer player's ability to command, communicate, and attack with his payloads. The computer player reacts to a slow escalation in kind, but if population centers are attacked will realistically mutually assure destruction. Game objectives are very hard to achieve. The player must capitulate the computer through destruction of its arsenal and command while maintaining a superior threat level preserved from the computer player's strikes.