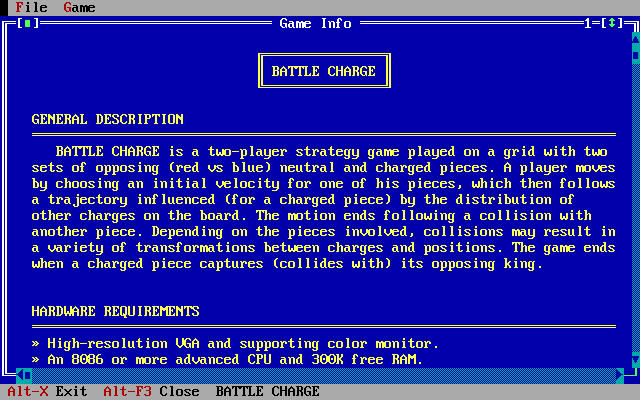 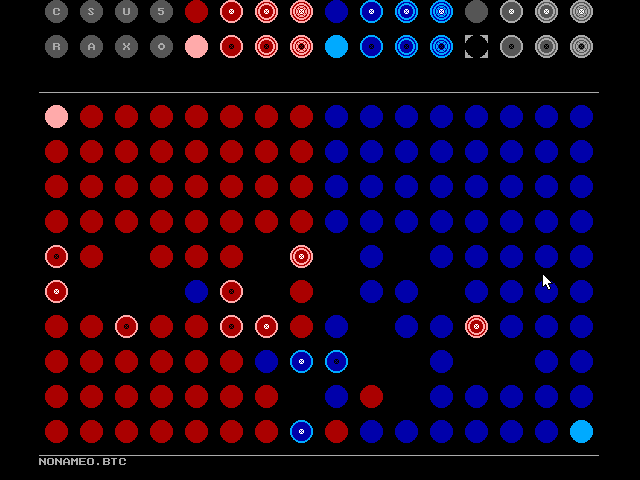 Battle Charge is a two player, shareware, strategy game which is so named because two players fight it out using charged tokens. The game area is a 16x10 grid that is completely filled with two sets of counters, one red and the other blue; these fill opposite halves of the screen so that there are 8x10 red counters in one half and 8x10 blue counters in the other. In opposite corners sit pale red and pale blue counters, these are the king pieces of each player. The player fires a token by clicking on it and drawing the mouse back to set a direction and velocity. Most collisions cause the tokens to change place but under certain conditions the player can combine them thus converting their basic tokens into charged pieces. The charged pieces, which can be charged to levels plus/minus 1, 2, or 3, have different properties. When fired in future moves their trajectory can be influenced by other charged particles they pass, in addition they may destroy, demote, or recycle an opponent's piece. The object of the game is to capture the opponent's king with a charged piece. Though the game is turn based and players are expected to alternate, the game does not enforce this leaving it up to the players to come to their own arrangement.