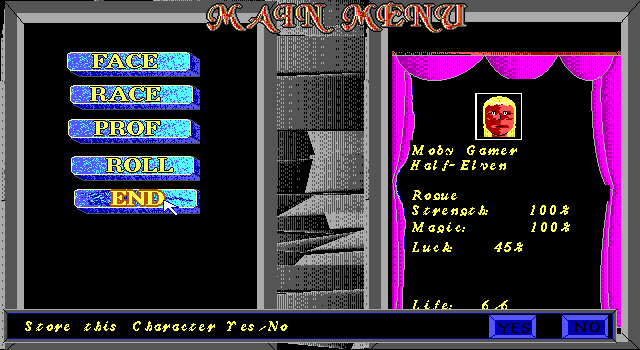 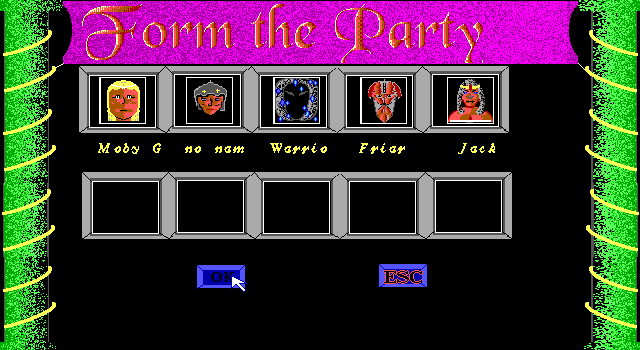 Bandor: The Search For The Storm Giant King is a single player, shareware, role playing game. It is the first game in a trilogy of games centred around the city of Bandor, the other games being Bandor II: The Wrath of the Storm Giant King and Bandor III: The Final Encounter. Bandor is a small, well ordered city in the land of Galia. To the south is the Mist Forest where lies the Fountain of Life, to the east are the slums, also called the Underworld. In the centre of the city are the twin towers where the Council of the High Lords meets. Here an adventurer can meet with the Lord Regent who assigns tasks and quests. Also within the city are masters of combat who can provide training, armourers, and a tavern where players can rest, hear gossip and gamble in the hope of increasing their wealth. There is a great temple to the P'Tah the allowed religion, there is another religion that of B'Nah but that has been banned though there are rumours it is still practiced in the slums. However, all is not well. There have been sightings of unnatural beats within the slums. There are even rumours that the Storm Giant King is in there somewhere gathering his forces... The game starts with the Wizard Osi welcoming the player and telling them about creatures in the slums and that they have been sighted in the Forest of the Fountain of Life. He tasks the player with clearing the forest and becoming a Hero of Bandor. The player must then create the characters they need to form their party, at least four will be needed, and they can be Humans, Elves, Dwarves, Half Elves or Half Dwarves. There is also a choice of six professions, Friar, Warrior, Mage, Rogue, Thief, and Jack of all trades. Once characters have been created and assigned to the party it's off to explore. There is no need to keep a paper and pen handy to draw a map as the game progresses because Bandor is a self-mapping game. The game is played with the mouse, it has optional sound and digitised speech.